I saw a change in Cecilia over the next few weeks.. It was a bit of a mind fuck. Each day I spent there I saw a little bit more of who she was. I mean she even gave me a fancy robe to wear around the house. It was beautiful.. I’d always seen her as a stern bitch, and she was a pretty scary woman when she wanted to be. I was sat in front of the fire thinking about that night 4 years ago; when she threw me out, when i saw the black silk of her dressing gown swish past me. She sat down beside me.

Luna: It’s not like you to sit on the floor with us peasants.
I joked. She didn’t laugh.
Cecilia: I was a “Peasant” once upon a time too
she sighed.
Cecilia: I was wild and crazy and a lot like you my dear. I’m not going to pretend that i thought you were going anywhere. When i first found out Sidney had brought you into this house, i thought you were just lying to him so you could use him; maybe steal something valuable. I was too quick to judge you..
Was she apologising to me?! WAIT. SHE was ” wild and crazy” I chuckled to myself as I pictured Cecilia doing anything “wild”
Cecilia: I smoked a lot of Pot you know… I bet I could still smoke our Sidney under the table.
She winked at me, the way Ace winks. I was in disbelief. I think my jaw legitimately dropped and it egged her on.
Cecilia: I did LSD you know, back in the summer of ’69. See I’m not as boring as you kids think I am. For the first time in 4 years i wasn’t scared of her. I was a mouse the last time I was here for her help, I just stayed up in Aces room and avoided her completely.. BUT you would too when the same woman had been so fucking awful just a week before. My world had just been turned upside down again but this time it wasn’t so bad. One thing bugged me though..
Luna: SO.. what changed?
Cecilia: There was a lot of things my dear; I’m not going to dwell on all the details. In the end I got addicted to something a lot worse than heroin.
Luna: What’s worse than junk ahahah?
Her face dropped and serious Cecilia returned.
Cecilia: Money.
She sighed as she stood.
I’m throwing a party this week, I expect you and Sidney to join. I’ve taken the liberty of purchasing your dress. All i ask is that you at least make the effort to look like a presentable young lady. I expect no cursing or vulgarity in front of my guests.
Her stern words rang loud and clear “Don’t fuck it up” basically..
I followed her upstairs.. I was hella tired again surprise, surprise.

ACE POV:
I was awake before her, surprise, surprise. I felt bad for her man; all she did these days was sleep. I could barely sleep at all, it didn’t help that she’d started crying in her sleep. I’d hug her, but it never made a difference. Over the past few weeks; months even.. since that argument. I was determined. Its true every time we were close to making it work.. I’d mess up somehow. The thing about this girl is, she has no reason to love a guy like me. She’s beautiful.. inside and out and losing her scares me, If we ever made it work I don’t know what i’d do; if we got somewhere and i lost her, if i fucked it up! In all these years i’d never made anything official with her.
I guess it was time to face my fears.. As soon as i saw that test. It was like a fucking epiphany. Its time for me to fucking grow a pair! I’d spent the last few weeks at my mothers psyching myself up..
I had no idea if I could be a good dad, but I knew she’d be an amazing mother… I knew it, This was my chance to give her everything she wanted.. this was OUR chance. I figured if i committed to her she might not feel so alone? I don’t know if that’s what bothered her enough to cry in her sleep or what? But it was worth a shot. Maybe I’m just a selfish ass hole but I was desperate. Desperate for her not to get rid of the kids.. I saw a future. I just want her to see it too.
I hadn’t noticed Luna had woken up. I always took the piss outta her for day dreamin’ and now I was the one doing it.
LUNA: Helllooo??
FUCK IT.. I’M DOING IT!

ACE: Luna, I want you! I want to be more than friends! I wanna be more than fuck buddies, i want you .. i want all of you. Fuck. I fucking love you Luna and this time i’m not gonna fuck it up! I don’t wanna lose you you’re the best thing i have in my life! Fuck!
I have never been so relieved.. It came out in one breath i bet I sounded like a nut job just blurting that out. SHIT I actually just said that. Fuck she’s covering her mouth is that good or bad ?! Hurry up and say something Luna , Shit shit shit… I shouldn’t have said anything. Fuck.
ACE: Sorr-
LUNA: Don’t you fucking dare apologise. Do you know how long i’ve waited to hear that you asshole.

SO how do you even ask someone to be your girlfriend when you’re in your 20’s, ‘Wanna be my girlfriend” just sounds lame.. and i’ve not asked a girl out since boarding school…
I bit the bullet.
We scooted over to the edge of the bed.
ACE: wanna be more than fuck buddies dickhead?
LUNA: Fuck yes. Fuck yes!

LUNA POV:
Cecilia was a wealthy socialite; and her party.. sorry “soiree” came by quickly..I slipped into the red fishtail gown.
She went all out on this dress; I did my make-up, she lent me some jewelry. I was barely showing thank god the dress was tight as fuck. I was determined not to fuck it up. You should have seen Ace’s face as i was getting ready. I figured it would be good to get all my swearing out before heading downstairs.

Ace looked good too, he always did, a black suit.. He said I looked beautiful like a princess. I blushed, He must have seen some crazy looking princesses..
Downstairs the Waltz music was playing as Cecilia mingled with the rich and powerful.
ACE: Wanna dance?
LUNA: I don’t know how to dance to this.

ACE: I’ll teach you..Just follow my lead.
LUNA: HOW do you know this Ace?
ACE: I grew up here remember Dummy. 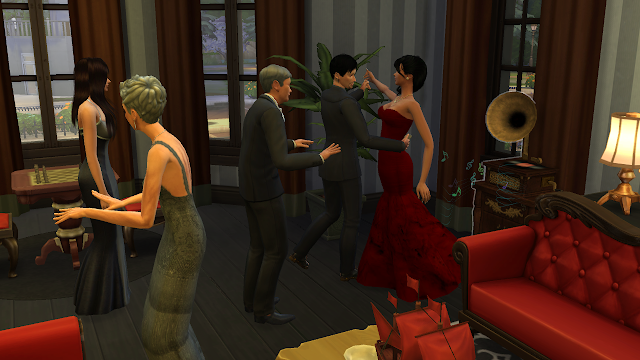 I was lost in his gaze as we danced. Everyone just kinda became a blur. Maybe keeping the twins wouldn’t be too bad? I don’t know. The more i looked into his eyes the more I saw a future there. It was like being at back at the restaurant on my birthday all over again. I was fucking terrified. But I was willing to give it a shot if he was. The next few months flew by and the doctors told me I was in my 2nd trimester.. If i was gonna get rid of the babies i’d have to do it soon. Over the past few months though Ace had been amazing, it was perfect.. He almost had me thinking I could do this. Cecilia still had no idea about the pregnancy. I’d been making use of the baggy tops i’d packed, we had made it an almost nightly ritual of chatting downstairs before bed. The chick had grown on me y’know. We’d laugh, we’d joke around, usually at Aces expense, tonight she’d decided to get the photo albums out. “Its customary as a mother to embarrass your children” she’d joked.
CECILIA: And that’s when he fell asleep in his birthday cake, he was a strange 10 year old… then again, he’s a strange adult.
She nudged me as she laughed.
LUNA: ahah that’s true. You raised a great guy though.
CECILIA: Its because he’s like me; instead of his father!
She erupted in laughter.
Cecilia: How are you and Sidney? now you are officially courting? Is he treating you right dear?
LUNA: Oh, we’re perfect thank you. He’s been amazing to me.
CECILIA: Well; its nice to see a change in him. You’re good for him dear. Especially now he’s going to be a father.
WHAT. THE . FUCK.
CECILIA: When exactly were you going to tell me about my grandchild?

My blood was boiling! Pregnant or not I bolted up those stairs. MOUTH ZIPPED MY ASS!