October 30th.
I love parties. Parties are great when ya haven’t just learnt that your dad killed your boyfriends sister and when fucking vampires aren’t threatening to destroy everything you care about. I dunno, that kinda shit just doesn’t make me wanna party. Yet here i was, THANKS Ace. To really put the icing on the cake though; 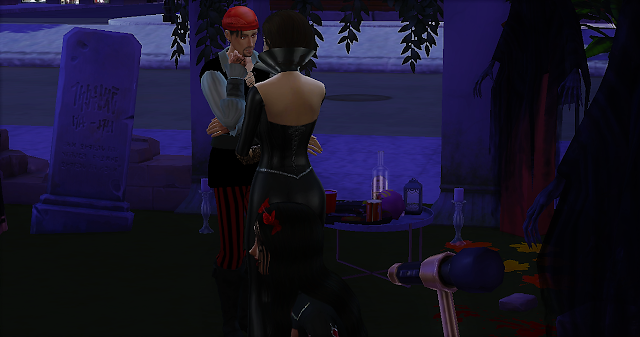 Ace was giving me the silent treatment talking to everyone except me; oh it gets better! Aphrodite and her husband Stanley were there! GREAT! Turns out that my plain as hell soccer mom neighbour Kate knows her from work. Yeah. this is a fantastic party. 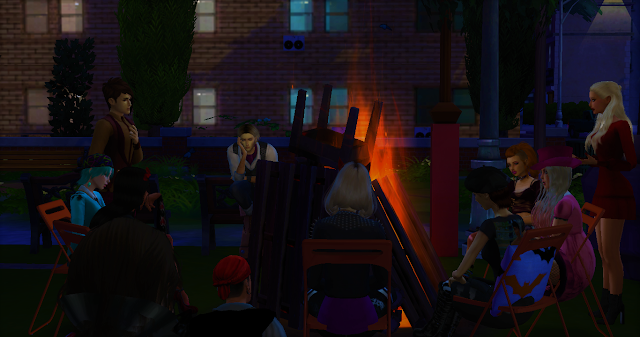 It was about 7pm when Avery; one of Kate’s kids decided to tell a “Horror story”… I soon found out that the Benson girls, Avery and Joanna, were “serial killer groupies” and I knew as soon as she mentioned San Myshuno where this story was going.
AVERY: So there was this guy, years ago. He used to pick up hookers in San myshuno….

DORIAN LOTHARIO POV:
I picked the dumb bitch up; these whores were getting wise to me but its crazy what some sluts do for money. It was 50/50 really. Some came back.. some don’t. The ones who don’t are my messages to my sis Blaze.. I hope she feels good, knowing that this is her fault. 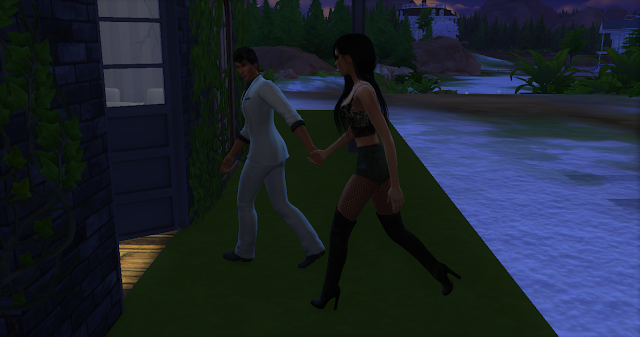 So anyway, this chick didn’t even ask questions y’know? She’s either an idiot or new to the game. Fuck knows.

She had her hair covering one eye like my bitch wife. At least this chick was a better lay. 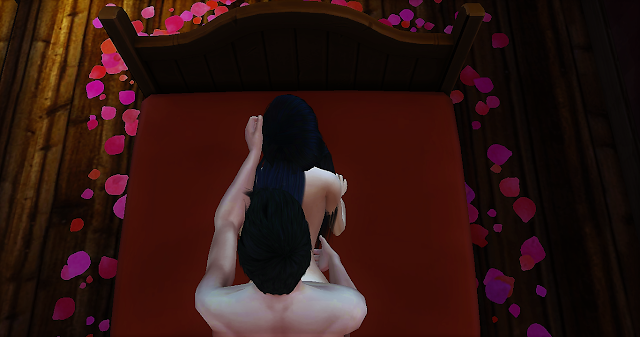 We fucked a few times before i told her to get the fuck out. She wasn’t leaving but she didn’t know that. 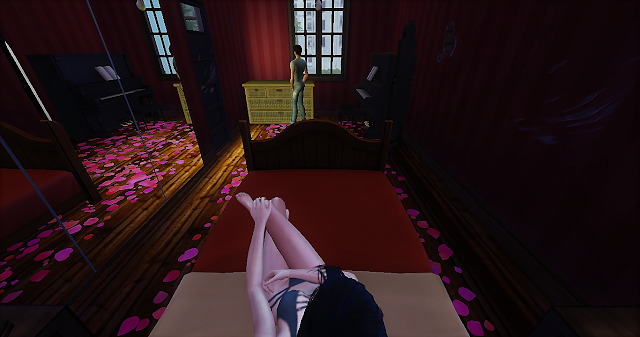 As i was getting dressed she told me her name. Beth? Bella? Something with a B. 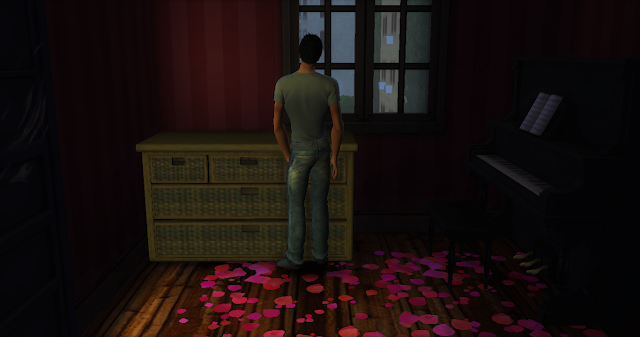 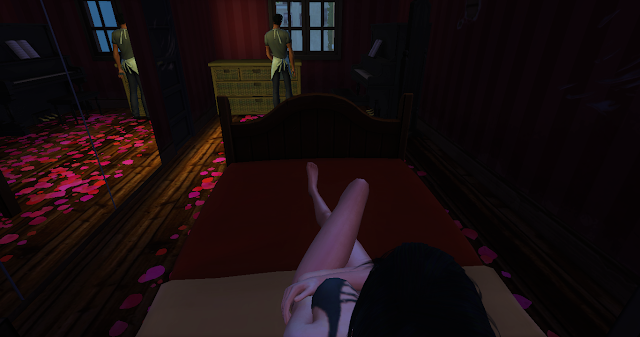 I couldn’t see her but I heard the fear in her voice. I felt powerful. Y’know this business its not that different from whacking mobsters. I’d felt it a lot over the past few years. It’s not just power. Its playing God.

DORIAN: Well.. I don’t wanna get too much blood on me.

*Scream*
She’d started running to the door. It was locked but hey, let the kid dream amirite?

B: You’re him? the guy on TV the slasher?
DORIAN: Well no shit. I’m not baking a cake am i? you dumb bitch. 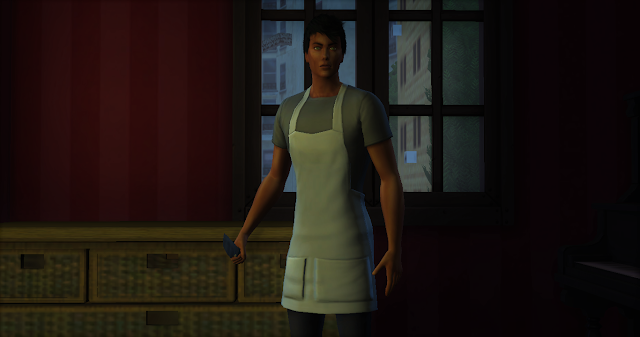 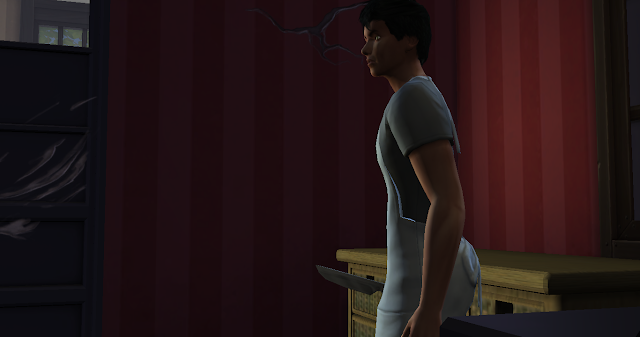 I lunged at her stabbing her through her stomach. 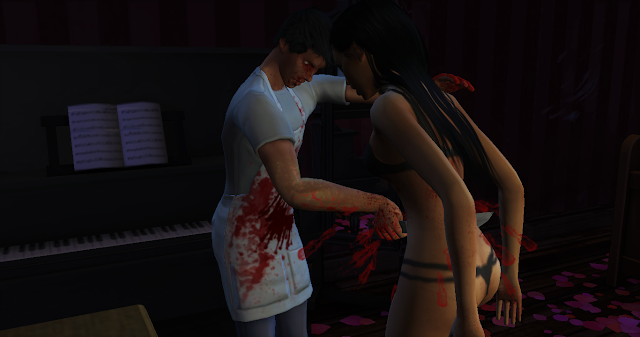 Before she fell i grabbed her throat, I looked into her eyes as the life faded out of them. I whispered to her. 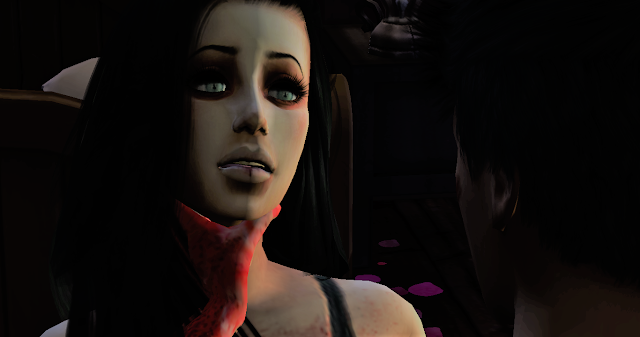 Dorian: Nice? Sweetheart. This is what a monster looks like. You filthy whore.
Releasing my grip on her throat, 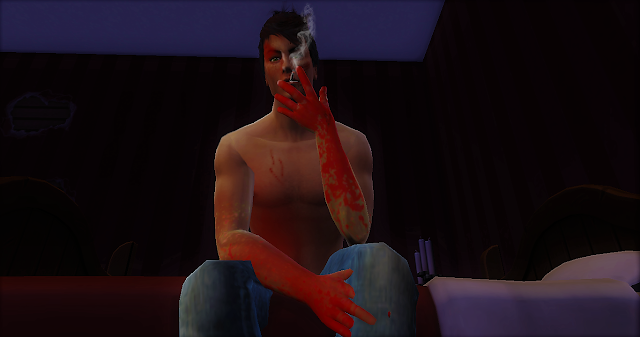 LUNA POV:
The red headed teen next to Aphrodite was the first to talk..

MORGAN: OH SHIT AVERY.! NIIIICE STORY!
I was already pissed but Aphrodite just HAD to rub salt in my wounds.
APHRODITE: I Heard the sick fuck used to fuck them again afterwards.
She smiled at me. Bitch,

JOANNA: The truth is no one knows EXACTLY what happened to them after that. Maybe he did maybe he didn’t.

AVERY: Wanna know the real twisted part though?!
He’d take their eyes! No one knows to this day why, he took it to his grave. ONE thing I can tell you though is these woods behind us… ? WELL that was his dumping ground,

and you see that old caretakers house just behind those trees?
THAT is the house he lived in!!! 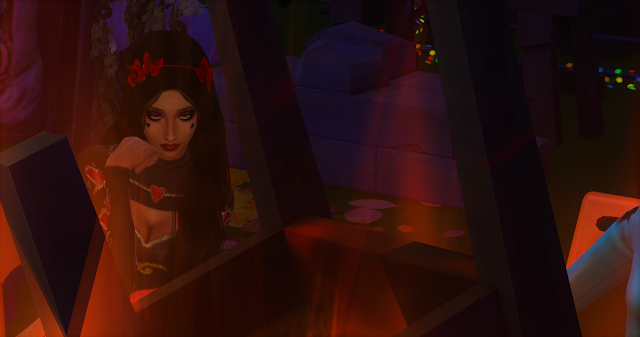 LUNA: No its not.
SHIT. Well done Luna. Everyone around the campfire stared at me. fuck, well everyone except Aphrodites husband, he’d not taken his eyes off the floor through the whole story.

APHRODITE: You know.. he had a daughter and she ran away, she’s never been found. She probably became some Junkie hooker and choked on her own vomit.

SERIOUSLY? What the fuck was this bitches problem. I get it, she hates my dad, but really? This is the chick I’m taking life saving advice from?

Fuck this party. I’m out. I got up and went over to the run down house. Kinda shit no one even cared I was gone.. Ace didn’t even bother to come find me.
Maybe i spoke too soon. I’d just finished off my last cigarette when Avery and Joanna came to find me.
AVERY: You’re her aren’t you? Dorians missing daughter? we thought it could be when mom told us you were called Lothario, but we thought it had to be coincidence NO WAY,
I stayed silent. 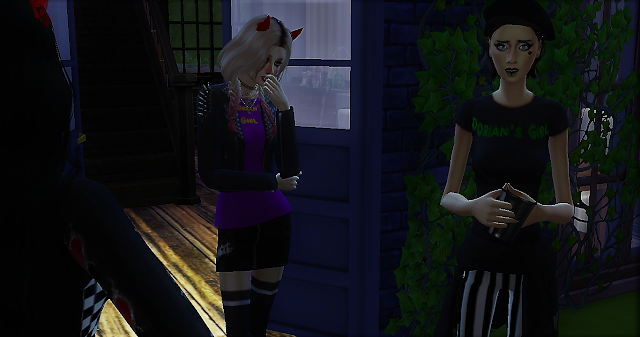 JOANNA: Just so you know we didn’t mean any disrespect. We LOVE Dorian we are like his BIGGEST FANS. In fact, we were gonna keep this between us two but for real you should be part of it! You NEED to see this.
Okay I was curious. I followed them into the house,

LUNA : AN OUIJA BOARD? This is what you wanted to show me?
I was pissed. what the fuck was wrong with these chicks.

AVERY: HEY, What the fuck man? we’re gonna try contact him tonight if you want in?
LUNA: No I FUCKING don’t want in. What’s with you kids? besides.. 1) why the fuck would his ghost be here? he didn’t die here and i KNOW he didn’t live here. 2) why the hell would you even wanna do that anyway. No i’m out. Enjoy ya little psycho seance.

AVERY: ‘K Man, go. pfft we thought you were cool.
I stormed outside to find Aphrodite’s husband Stanley. 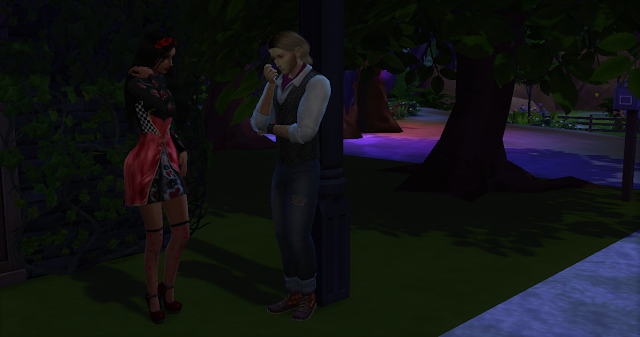 LUNA: Hey, erm Stanley was it? I know you’re a vamp and stuff and Aphrodite’s man and you probably hate my guts like she does but is there any chance ya got a smoke?
STAN: Just call me Stan; wait? a vamp?! As in vampires?! and I don’t hate you but I’m all out. sorry. What are you doing out here? I thought you left ages ago?

LUNA: OH Shit? You aren’t a vampire? Yeah I wish I had. I’m sick of shit yanno.
STAN: I’m just fucking with you. of course i’m a vampire and Yeah i get you. and take a look around the corner.
Well that was embarrassing, i poked my head around the corner of the house;

HOLY SHIT BALLS! I turned back to Stan,
LUNA: Why don’t ya go over there and step in? RIP HIS THROAT OUT?! why are you letting her cheat on you dude?
STAN: She already knows i’m here; she can smell me. There’s no point going over there.
LUNA: But you can’t just sit back and let it happen?! Who gives a fuck if she can “smell” you, that’s weird by the way. Just go over there and give her what for!
STAN: I can’t. She’s stronger than I am. I MADE her and she’s stronger than me! Can you believe that. She does whatever she wants when she wants to whoever she wants. That’s just her. Luna; …..You can’t trust her.

LUNA: I can’t trust her? no shit.
STAN: Hmm…. How do you feel about going for a drink. I think we could both use one after tonight right? We can get some cigs on the way.
leaving a party to have drinks with a strange man…I don’t think Ace would be thrilled.
LUNA: Yeah I don’t know if that’s a good idea
STAN: I’d like it if you did. I’m sure you’re better company than myself.
He was looking nervously in the direction of where Aphrodite was. If vamps could sweat then Stan would be soaked.
He was holding his tongue I could sense it. There was something he didn’t want Aphrodite to hear.
I guess a drink or two wouldn’t be too bad. Its not like Ace had even bothered to text me since I’d disappeared from the party if he wants to be like that fuck him.
I needed to know what Stan was hiding.